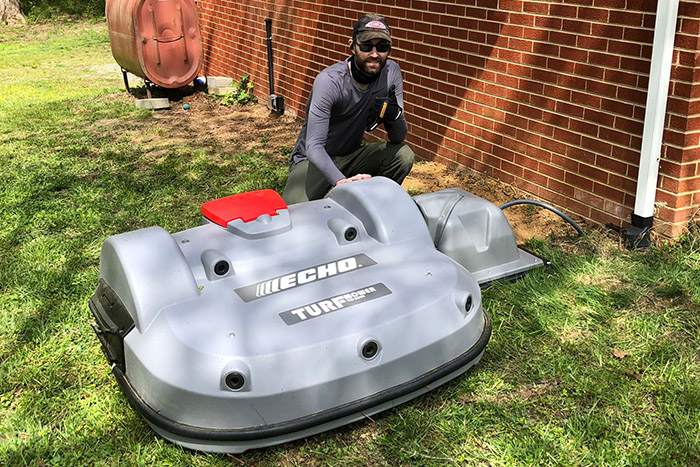 You’ve seen our TM-2000 in action on sports fields and golf courses—but property owners can take advantage of our autonomous turf mower series, too.

Tim Oster, a property owner with several acres of grass to maintain, had been on the search for a machine that could handle the upkeep on his property and save time. That’s when Tim found ECHO Robotics through YouTube.

“I was debating for a couple of years between commercial electric riding mowers and the ECHO TurfMowers. The electric riding mower I was using has lead-acid batteries—which take 12 hours to charge—and over several years, the operating runtime dropped from a couple of hours to one hour due to battery degradation. So, I was only able to cut partial areas of my lawn in a day.  After a lot of research and weighing the positives/negatives of riding mowers versus the ECHO robots, I decided to go with a TM-2000. And I’m glad I did.”

During the installation of the TM-2000, Tim was in awe of how quiet the machine was during operation.

“I was not prepared for how quiet the TM-2000 is,” Tim said. “It’s so quiet I can run it at night without disturbing neighbors.”

Tim’s property was set up with two zones through a fast and easy installation: one for the front yard and one for the back. These dual locations allow him to specify where and when the robot should mow. “Initially, the robot was getting stuck in divots, which was expected. After filling in these problem areas with dirt, the robot hasn’t gotten stuck in over a month,” Tim said about his experience.

“Recently, I was away from my house for over two weeks, and the robot was still working fine when I got home—my Roomba stops and gets stuck more often than the TM-2000. The maintenance is simple, the blades are really easy to swap out with a flathead screwdriver, and I use a leaf blower weekly to remove any build-up. I’ve had the TM-2000 for two months, and I couldn’t be happier.”

Tim also appreciates the ease of the web portal and mobile app, which allow him to check in on the robot and see its exact location.

“The app has already been updated and improved in the short time I’ve owned the robot. The web portal has more detail than the app, and I use it frequently on my laptop to review the cycles and paths the robot has taken when mowing. I’ve had no connectivity issues when using the app or web portal, which makes them great for remote monitoring. The grass looks better than it ever has, and I’m really pleased with the TM-2000, which has exceeded my expectations. This is an amazing product, and ECHO has proven that robotic mowers are better than riding mowers; it’s like having a landscaper 24/7!”

To learn more about the TM-2000 and how you can add one to your property, please reach out.

You can find out more about which cookies we are using or switch them off in settings.

This website uses cookies so that we can provide you with the best user experience possible. Cookie information is stored in your browser and performs functions such as recognizing you when you return to our website and helping our team to understand which sections of the website you find most interesting and useful.

You can adjust all of your cookie settings by navigating the tabs on the left hand side.

Strictly Necessary Cookie should be enabled at all times so that we can save your preferences for cookie settings.

If you disable this cookie, we will not be able to save your preferences. This means that every time you visit this website you will need to enable or disable cookies again.

This website uses Google Analytics and Facebook tracking to collect anonymous information such as the number of visitors to the site, and the most popular pages.

Please enable Strictly Necessary Cookies first so that we can save your preferences!